“Georgia that dog has to go,” Holly crossed her arms and blocked the entrance to their apartment. Her emerald green eyes piercing into Georgia as Georgia scrunched up the terrier’s white fluffy fur in his hands.

“No!” Georgia said loud enough that everyone else in the hallway turned to look at them. Holly rolled her eyes opened the door and pushed her friend inside. “I clean up after her, pay for her food, walk her, I do everything for her Holly. I’ve never even asked you to do anything for her.”

Holly went to the fridge, the sun gleaming on her spiked blond hair. She grabbed some yogurt and a spoon. “That dog has thrown up on the floor twice this week,” Holly said twirling the spoon in her yogurt. “If you don’t take her to the pound tomorrow I will.”

The dog wagged its tail as Georgia stroked its back. “And I told you it was the food so I changed what I was giving her.”

“Yeah, by making homemade meals for her likes she’s a human child or something.”

“They put sick animals in dog food,” Georgia said. “And might I remind you that this dog used to belong to my grandmother and she’d be devastated if I ever gave her away.”

Holly swallowed her yogurt and stared at her friend. “You can’t keep doing this to yourself Georgia. All your time outside of work is dedicated to that brain dead dog,” Holly paused. “And besides your grandmas dead its not like she’d know.” Tears went down Georgia’s eyes as she clutched the small dog in her arms and walked over to her room. “Wait I didn’t mean-” Georgia shut the door to her bedroom. “Hey we’ll talk more about it tomorrow okay? I didn’t think-,” that you were that attached to her, Holly thought as she threw the rest of her yogurt in the trash.

Holly cleaned up the dinner she had made for herself -Georgia was still in her room. Holly walked up to Georgias door and knocked on it, “hey I’m going to bed I got some leftovers in the fridge if you want any.” Then Holly walked to the bathroom, brushed her teeth, and went to bed.

A few hours later the dog started barking, Holly opened her eyes and sighed, “Geogeria get her to shut up!” Holly shouted. However, the dog kept barking. Holly threw her blankets off the bed and stormed to her door and swung it open. Then she stopped, a large dark figure looked over at her with his hand on the doorknob to Georgia’s bedroom. Holly grabbed a small statue from the dresser outside her room and charged toward the figure. The stranger ran for the front door and Holly threw the statue towards him, but it only shattered against the door. “Get back here jackass!” Holly shouted flinging the front door back open and running into the hallway. She saw him standing in the elevator, but the door closed by the time she had gotten to it. Holly called the police and went back to her apartment. She turned the lights on and through the phone told them it looked like nothing was missing. She opened the door to Georgia’s room -it was unlocked. Holly switched on the light and Georgia looked up at her with squiting eyes. The dog lay beside her facing the door.

“What is it?” Georgia said rubbing her eyes with the back of her hands.

“The dog gets to stay,” Holly said and walked away.

Prompt: Write about two friends having a disagreement. 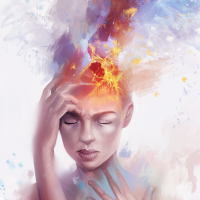